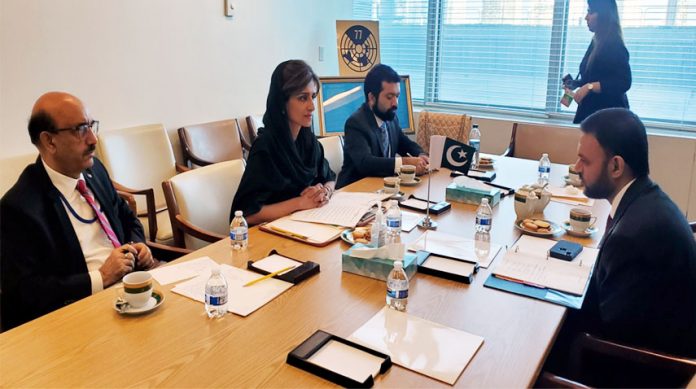 Pakistan’s Minister of State for Foreign Affairs Hina Rabbani Khar has reiterated that Pakistan attaches importance to promoting and protecting its minorities. Ms. Khar stated that Pakistan is keenly serious in protecting the human rights of all Pakistanis, whether Muslims or Non-Muslims. She was called on by the US Ambassador in Large for International Religious in New York.

Pakistani lawmaker asserted that Pakistan’s parliament takes the matter of protection of human rights of all Pakistani citizens including the minorities; very seriously. She told the US Ambassador at Large for International Religious Freedom Rashad Hussain, that Pakistan attaches importance to the promotion and protection of the rights of minorities living in the country.

While talking to the US Ambassador at Large for International Religious Freedom, she said that religious diversity is Pakistan’s strength as she continued to add that the religious minorities are playing instrumental role in the socio-economic development of the country. Mr. Rashad Hussain on the other hand appreciated Pakistan’s unceasing engagement with the US on issues related to religious freedom.

On this occasion, Ms. Khar pointed finger at the escalating religious intolerance and extremism resulting in persecution of minorities in India. She said that the worsening repression of Kashmiris at the hands of the Indian Army, blatant human rights abuses and killings of Kashmiris is in fact a matter of grave concern for the international community in particular the US.

In sharp contrast to Ms. Khar’s statement, the USCIRF (United States Commission on International Religious Freedom) in it’s annual report of 2022, stated that: “In 2022, Pakistan’s religious freedom conditions remain on a negative trajectory with religious minorities subject to frequent attacks and threats including accusations of blasphemy, targeted killings, lynchings, mob violence, forced conversions, and desecration of houses of worship and cemeteries.”