Kashmala a victim of Peshawar Blast. 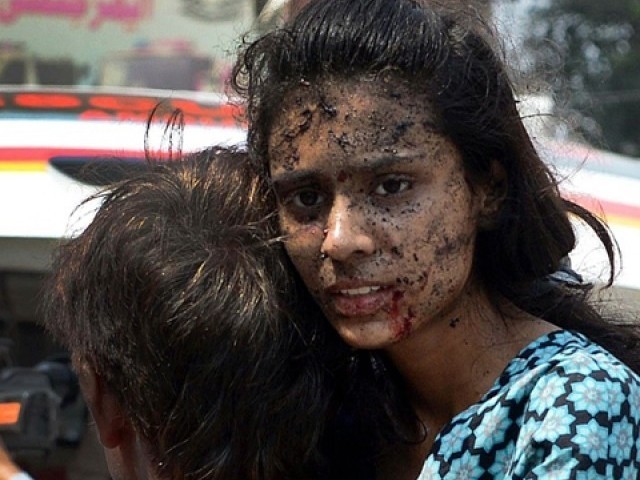 On 22nd of September 2013, around 500 persons gathered for Divine Sunday Service including another 64 children who were present in the Sunday School Center in the Church compound. Two suicide bombers entered in the compound and exploded themselves while the worshipers were coming out at the end of the Service at All Saints Church, Kohati Gate in Peshawar.

116 persons lost their lives as well as 169 got injured, almost 300 people were sent to Lady reading hospital-many with wounds only seen in combat.

It was the homemade explosive packed with ball bearings that tore off feet, ankles, Calves and entire legs and they exploded in the Church compound. So far dozens of the victims have lost limbs in the terrible blast.

We Farrukh Saif Foundation previously known as [WVIP] reached Peshawar and during our visit we found that a teenage girl Kashmala  Munawar, a student of 1st year of High School . On 22nd Sept, 2013 she went to church with her family where she got seriously injured in the blast. We immediately requested our Partners Rescue Christians to help the girl in the medical treatment , which they promptly approved and allow us to admit her in the best hospital in Peshawar.

At first she was taken to the Lady Reading Hospital for treatment and the doctors said that there are multiple pellets in her legs. They operated both of her legs and rods were fixed in her legs. Her leg got infected because of which doctors amputate her leg.

After amputating her leg doctors discharged her from hospital. She was taken to the Mission hospital (Owned by Diocese of Peshawar).

Right after knowing the situation of Kashmala, we planned to moved her to RMI hospital [which the best Hospital in Peshawar) where Orthopedic specialists are treating her. In the first instance doctors suggested to removed her second leg as well. But now by the grace of God and endless efforts of doctors we were able to save her second leg.  But the leg which has already been amputated will again be operated 9 Inches more.

Kashmala is very intelligent girl she aimed to be the educationist, however she was targeted by the same Talibans who target Malala Yousaf Zai. But it is strange that Local media and international media takes Malala as Symbol of education but nobody even knows the name of Kashmala. Even our Christian NGOs and Churches are supporting Malala but for Kashmala everyone is silent.

There are many Christian Malala’s who lifted their voices against mediocrity, education and health but no one shares their stories on their social timelines. This is a time to lift your voice for your brothers and sisters in Pakistan.

We are supporting Kashmala in her medical treatment and we have promised her that we will help her in get best education. Thanks to our partners who help the girl to save her second leg.May God Bless them