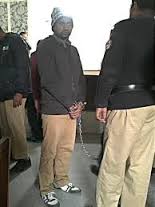 Saeed Ahmed Khokhar filed a complaint in the Police station that he received the derogatory text messages in different dates from the mobile phone of Asif Pervaiz. He further stated that Asif has used the abusive language against Islam, Koran and prophet of Islam.

Police arrested Asif Pervaiz and sent him to judicial custody to avoid any misfortune.

Few years back Mr. Anwar Masih who is the father of Asif had also faced the same issues in their home town village Gandowal near Narowal. Even the family was forced to convert to Islam by Sapa-e- Sahaba a banned Islamist group.

But Christian community helped them in getting out of the Village and since then they remained hiding.

Asif Pervaiz has 4  minor children and they are under great threat .

Asif’s case is one of the new versions of Blasphemy law it has never been observed that all the section have been imposed on any victim of Blasphemy.

We [FSF] are now defending  Asif Perviaz  in the court proceedings .We aimed to help the persecuted family with the Safe home and monthly expenses. We would request International Community to lift your voice for the Christians of Pakistan who are continually persecuted for their Faith.