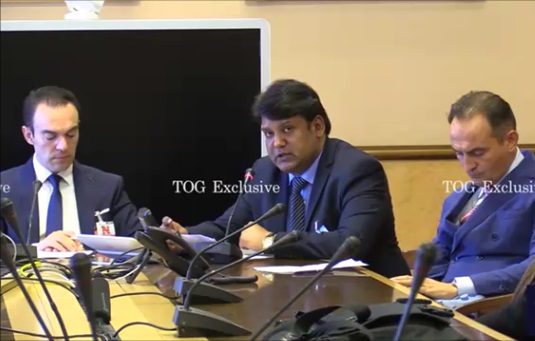 Geneva- Switzerland : It was a privilege to speak about the Persecution faced by the Christian community in Pakistan at United Nations Office in Geneva on 18th Sept,2017.

Here are the contents of my speech “ … The issue of the persecution of the religious minorities is not new to the International community, in-fact Pakistan has been declared as one of the dangerous countries for the Religious Minorities by the US state department and other renowned research centers of the world.

Before going further about the Religious Persecution in Pakistan, I would like to point out that Pakistan was never envisioned as a Country for Muslims only. Mr. Jinnah, prior to the Independence of Pakistan stated on 14th Nov 1946 “I am not fighting for Muslims, believe me, when I demand Pakistan.” It is a clear message by the Founder of Pakistan that he was neither working for Muslims nor envisioned a theoretical state. His aim was to build a secular separate country for the religious minorities of India.

Christians played vital role in the creation and development of Pakistan and till day We are the most loyal citizens of Pakistan. But There are so many issues of Christian community in Pakistan, that if I would start speaking about the plight of oppressed Christians, it would take hours of mine to elaborate those facts.

The discrimination and persecution of Christians and other Religious minorities are rooted in the constitution of 1973, drafted by Zulifqar Ali Bhutto’s Government and approved by the parliament on 10th April 1973. Due to this new constitution all, the religious minorities were barred from any higher official status the in government.

Continuation to this, the Major setback for the Christians and Other Religious minorities was the 8th amendment in the constitution made by the dictator Gen. Muhammad Zia-ul Haq and empowered by the Nawaz Sharif government in May, 1991, This entire situation led  the religious communities’ persecution in Pakistan and legislation of Islamic Laws in the state gave reawakening to the Christian persecution through the Blasphemy Laws.

Since 1987 to 2017, so far 222 cases of Blasphemy laws have been registered against  Christians. This law has been used to settle down the personal vendetta against the oppressed and persecuted Christian community. By using Blasphemy law, many Christian Colonies and villages were set on fire by the Fanatic Muslims. Shanti Nagar, Baminwala, Koriyan, Christian Colony Gojra and Badmi bahag are few of such places which were destroyed and ransacked by the Muslim fundamentalists.

The policies of 1980s, In which mujahideen from around the world were called to station in Pakistan and hundreds and thousands of Madrassa’s were established to train those mujahideens to Jihad against the Russian invasion in Afghanistan. After the Afghan- soviet war, these Mujahideen were never disarmed and later Pakistani establishment used them as a tool for the proxy war within and outside Pakistan. These trained Mujahideen were activated as Lashkar-e- Taiba, Harkut-ul- Mujahideen and Sipa-e- Sahaba and Jaish-e-Mohammad and till day these sorts of groups  are still  active in Pakistan and Pakistani society has become the safe heaven for such mindset.

This Extremists mindset started targeting the Churches and Christian events, On 22nd  September 2013, a twin suicide bomb attack took place at All Saints Church Peshawar in which 132 people lost their lives and more than 200 people were seriously injured.  A Similar sort of attack took place on 15th March 2015, at Roman Catholic Church and Christ Church during the Sunday service at Youhanabad Lahore, in which at least 21 people were killed and 48 were wounded in the attacks. After the attack at Youhanabad Church when Christian mob protested and took law in their hands and killed two facilitators of suicide bombers, the law enforcement agencies arrested 42 Christians, in which one has lost his life in the jail and the rest are being asked to convert to Islam if would like to see the day-light again.  On 27th March 2016, on Easter Sunday, at least 64 people were killed and over 246 injured in a suicide bombing in Lahore.

The Province of Punjab in Pakistan has become the center of these terrorist organizations. Time to time Pakistani establishment is using them for the short term objectives. That is why Punjab is the dangerous province for the Christians and Other religious minorities. Since 1987 to 2017, majority of the cases of persecution were observed in this province.

You all have heard about the persecution of Asiya Bibi, but today I would like to share another heart touching case of Blasphemy that needs your attention. A Paralyzed Christian man Shafaqat Emmanuel and his wife Shagufta Kausar, who are the parents of four underage children, were arrested in Gojra City on 27th July,2013 and awarded the death sentence on 4th April,2014. They were accused of sending blasphemous text messages to the Muslims. However, both of them are uneducated and unable to read and write Urdu or English. Even knowingly, the Pakistani court has given them the death sentence. After three years when the appeal was fixed before the High court bench, they refused to hear the case because of the intimidation from the Islamic groups. This case was also like the cases which were designed to settle down the personal vendetta against the Christians.

The Christian community in Pakistan is facing discrimination and persecution on daily basis. The Persecution of Christians has forced them to flee from their homeland and took asylum in Sri-Lanka, Thailand and Malaysia. From 2012 to 2015 more than 12000 Pakistani Christians families left Pakistan to avoid future persecution. Hundreds of them are still in the Immigration Detention centers in Bangkok Thailand. If there is No persecution in Pakistan then why these people are leaving their homeland and facing the hardships in the jails of other countries.

Christians of Pakistan have never been considered as equal citizens of soil and it is even worst that the world is unable to recognize the Religious Persecution of Christians taking place in Pakistan. Every year 1000 girls are abducted in Pakistan, almost 700 of them are Christians or Hindus. These girls are abducted, raped and then Converted to Islam and sometimes even sold to the sex industries.

Christian discrimination and Persecution is on its hype in Pakistan on 27th August 2017 when a teenage Christian Boy Sharoon Masih, who was studying at MC Model Boys Government High School in the Punjab was beaten to death by his fellow school student for drinking the water from the same cup used by Muslims students.

Almost every day we witness such incidents in Pakistan , Therefore, I will urge and invite the United Nation and the International community to investigate the religious persecution in Pakistan, which is mounting as the days pass by , where the religious minorities especially Christians are forced to leave their homeland.”

We will continue to  raise the voice for the Persecuted Christians of Pakistan.