Hindus in Pakistan demand the security from the Pakistani Authorities 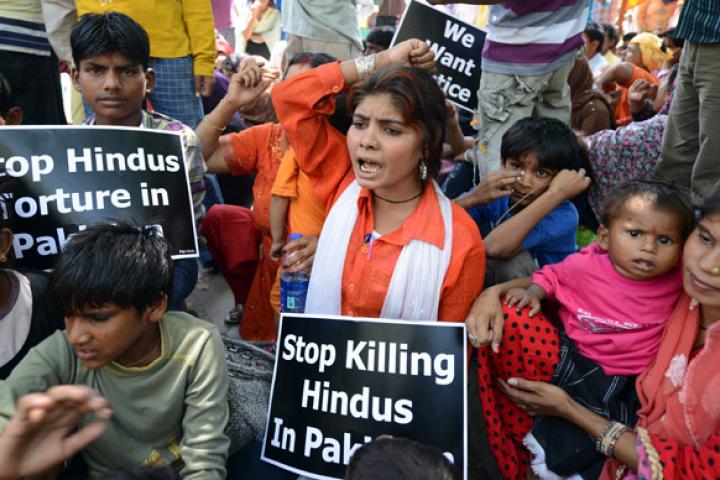 Karachi – Pakistan July 28, 2016: The growing persecution in Pakistan with the Hindus is on its height. Since 2012, large number of Hindus is leaving Pakistan for the security of their woman and properties and they are taking refuge in India. The Province of Sindh has become the center of Hindu persecution in Pakistan, it is a very surprising situation, as the province is governed by the most secular political group, Pakistan People’s Party .

However it has been noticed that majority of the MNAs and MPAs of Political parties are involved in kidnaping and abducting Hindu business community and young girls. Recently, after the Blasphemy accusations on the member of the Hindu community, Amar Lal, the local Muslim Community killed two Hindu youngsters who were shot dead in broader daylight in the Ghotki District.

On Wednesday, July 27, the Hindu leaders uttered fears of hesitancy pursued by blasphemy dispute against Amar Lal. They demanded that Hindu youth Sateesh Kumar has lost his life due to the conflict created by the allegation. The entire Hindu community in the Ghotki District is frightened and hundreds of people have moved to the other nearby cities. The leaders of the Hindu community stated that the country is witnessing an awful increase in religious violence or mob violence against the minority groups.

It has been seen that in recent years the religious persecution in Pakistan has reached on its hype. The abduction, rape, forced conversions and kidnaping for extortion, and accusing minority members for Blasphemy to settle down personal vanadate has been amplified.

However, after killing of two Hindu youngsters, the law enforcement agencies came in action and arrested 150 people linked to the mob violence in overnight raids. The mentally challenged person Amar Lal who had embraced Islam four years ago was accused of allegedly desecrating Islamic Quran on 26 July.

Even knowing that Amar Lal was converted to Islam years back, the Extreme element of the society has targeted the Hindu community. Hindu Community was forced to escape from their homes when the tension and violence started in Ghotki , Ubauro , Daharki, Khan Pur Mehar and Mirpur Mathelo. The Announcement was made from the Mosques to punish the Blasphemous. The situation in Pakistan is getting hostile day by day and it seems difficult for the minorities to stay in Pakistan.