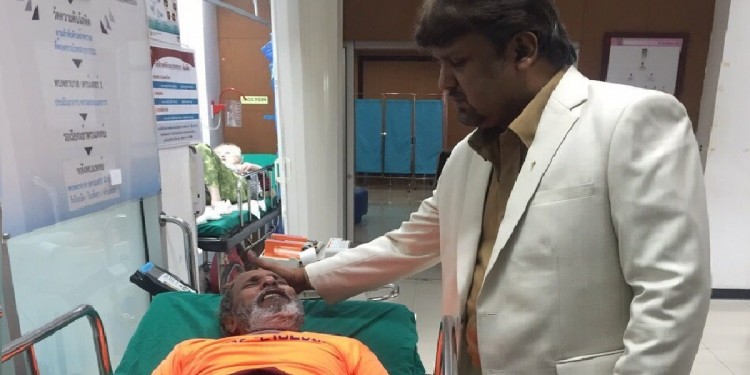 He was failed to protect his family and unsuccessful to fulfill the dreams of his children. Not because he was not a good father or good husband but because he lost the battle of life. Pervaiz Ghouri, like thousands of other persecuted Christians fled Pakistan and sought protection in Thailand, but no protection was ever given to him neither the resettlement to a safe third nation was ever done by UNHCR.

He passed away with the shattered hopes of seeing his family in a safe place where they could worship Christ freely and no fear of being burnt alive would chase them. In September ,2015 he was caught by the Thai immigration during a raid on asylum seekers, on January 6th he seriously fell ill in the immigration detention center and he was urgently transported to the hospital by the team of Farrukh Saif Foundation. The doctors had already told that his condition is quite critical and that the chances of survival are very low. Despite the low chances Farrukh Saif Foundation decided to stand beside him in the battle of life against death and bore all his medical treatment expenses.

January 10th Pervaiz took his last breath. He left his family crying and broken in Bangkok. Yes, we admit that he was seriously ill and that is why he lost his life, but the question is; why and how he got ill? Like many other Pakistani Christian asylum seekers he was also passing through the problems such as:

Today we are not going to judge anyone neither declaring someone as culprit but what we want today is leaving the decision and authority to prosecute responsible in your hands. 13 innocent Pakistani Christians have died in last 1 year. How many more are we expecting to die? Few deaths in west make the international headlines but few deaths of Pakistani Christians do not attract anyone´s attention!

Just few days ago we lost Sanina Faisal, now Pervaiz Ghouri, who will be the next? Is Bangkok going to be the silent graveyard for the Pakistani Christians? Today we do not take any action but one day in near future these deaths will be remembered same as the massacre of Jews by Nazis in Europe.

Share
Facebook
Twitter
Pinterest
WhatsApp
Previous article
Is there any difference between the drowned Syrian child and the Pakistani Christian children in Thailand? By Farrukh H.Saif
Next article
Whose hands are stained with my blood? Sanina Faisal´s soul in search of justice in Bangkok