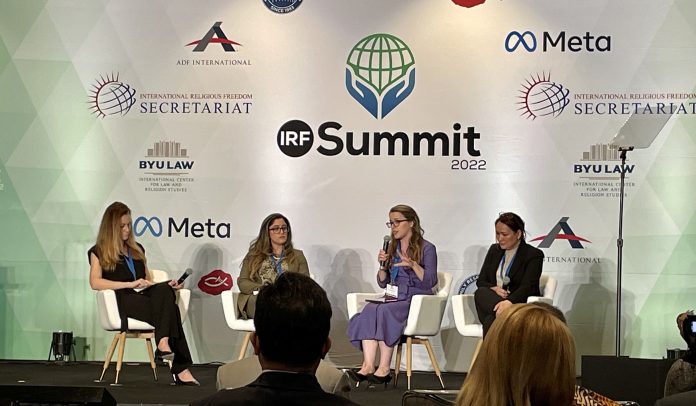 Women are being subjected to increased sex-based religious persecution, around the globe. During a panel discussion at the International Religious Freedom Summit in held in Washington on June 28 – 30, the panelists reiterated that women are being targeted increasingly because of their vulnerability.

Dr. Ochab, along with other rights advocates, spoke about the persecution of women hailing from religious minorities at this International Religious Freedom Summit. They said that women are facing horrors of abduction, rape, forced marriages, forced conversions, and other forms of physical and mental torture. This type of persecution is ongoing and is real. The panelists urged for assistance for the victims , at the same time, called for the justice being served to the perpetrators and said that they should be held accountable in order to prevent these atrocities in future.

Advocates, discussed cases of Christian women in Nigeria;  Rohingyas women, Shia and Hazara women in Afghanistan; Uyghur women in China; and the Yazidi women in Iraq. Moreover, plight of minorities’ women in Pakistan and Ukraine were highlighted.

British parliamentarian and human-rights advocate, David Alton referred to the women suffering for their faith as those “at the foot of the cross” who refused to flee.  He said that recently, he attended the opening of an exhibition called “Tears of Gold” at the Palace of Westminster. The exhibition featured paintings by Hannah Thomas on the theme of persecuted women. The paintings also depicted Rohingya and Ukrainian women.

Naomi Kikoler – Director of the Simon-Skjodt Center for the Prevention of Genocide said, “In general, when we talk about kind of gender and genocide, we tend to minimize or overlook the experiences of women and girls.” She said that females are experiencing persecution “in a very particular and acute way.”