Who will be the next, Blasphemy law in action again . 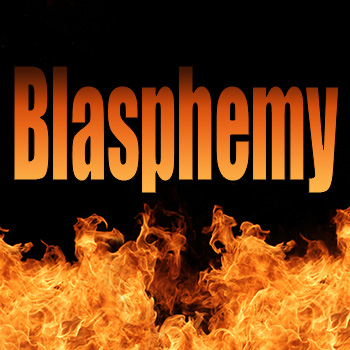 Police in Khichiwala, Bahawalnagar district have charged a young Christian woman under the country’s blasphemy laws allegedly for speaking against the Holy Prophet (PBUH), while her family claims that she has been framed for refusing to renounce her faith on the insistence of some relatives who had recently converted to Islam, Pakistan Today has learnt.
Twenty-six-year-old Shamim, mother of a five-month-old girl and resident of Chak No. 170/7R Colony, Fort Abbas tehsil, was taken into custody on February 28, by the Khichiwala Police and charged under Section 295-C of the Pakistan Penal Code after her neighbours accused her of uttering blasphemous remarks against Prophet Muhammad (PBUH).
However, Shamim’s brother Ilyas Masih and brother-in-law Shahbaz Masih told Pakistan Today that the young woman had been wrongly accused as she had turned down an invitation to convert to Islam just a day before she was accused of uttering blasphemous remarks.
“Nazeeran, sister of Shamim’s husband Bashir Masih, nephew Nadeem and niece Bella converted to Islam on February 24, and called on her to do the same … she refused, telling them that she was satisfied with Christianity and did not want to convert,” Ilyas said.
“Shamim told us on the telephone that Nazeeran and others were forcing her to convert, and asked us to visit her. We [Shamim’s father and two brothers] went to meet her on February 27, and left just before evening. At night we were informed that Shamim’s neighbours had accused her of blaspheming,” said Ilyas.
According to the First Information Report (FIR No. 30/12) registered by the Khichiwala Police Station, Ansar Ali Shah, a local prayer leader of Chak 170 /7R Colony, alleged that Shamim’s neighbours Hamad Ahmed Hashmi and Abdul Qayyum had told him and other Muslims that they had heard the Christian woman blaspheming while standing in her courtyard.
As the allegation against Shamim spread, a large number of villagers besieged her house and demanded “severe punishment” for her as she had hurt their religious sentiments.

Shamim’s family claims that she has been wrongly charged with the offence.
“Qayyum, one of the two men named in the FIR as witnesses, has denied hearing anything from Shamim’s mouth that supports the charge. Qayyum told police that he wasn’t even present in his house at the time of the alleged incident, and had come to know about it from Hamad, the other witness,” said Shahbaz, Shamim’s brother-in-law.
Shahbaz said that according to the information gathered from Shamim’s neighbourhood, Hamad, who drives a motorcycle rickshaw, was also not present at his house at the time of the alleged incident, 3pm (as noted in the FIR).
“Hamad transports schoolchildren and could not have been in his house at the time of the incident as it was just after school closing hours,” he said.
Talking to Pakistan Today, Bahawalnagar SP Investigation Irfan Ullah admitted that one of the two witnesses had admitted to not being present at the alleged crime scene at the time of the incident.
“Qayyum told us that he hadn’t witnessed the incident and his name had been included in the FIR by the locals, but still that does not prove that Shamim did not commit blasphemy. The other witness is standing by his claim and she has produced nothing so far which can prove her innocence,” Irfanullah said, while vehemently denying that the police had caved-in to pressure of the locals and registered the case in undue haste.
“I visited the village twice and so far nothing has come up that suggests that the people have accused Shamim wrongly. We registered a case against her on the directions of the District Police Officer,” he said, adding that her challan would be sent to court within the week.
Bahawalnagar DPO Salman Ali Khan’s phone went unattended.
Shamim’s family and her minor daughter, meanwhile, will have to wait for a long time until she can return back to them.
To date no one has been executed for blasphemy in Pakistan, as most are freed on appeal after suffering for years under appalling prison conditions. However, vigilantes have killed at least 10 people accused of blasphemy, rights groups estimate.