Terrorism on its Heights in Pakistan: By Farrukh H.Saif 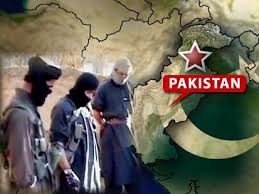 Terrorism in Pakistan has become a highly violent reality in recent years. The annual death toll from terrorist attacks has risen up to approximately 60,000 in last 13th years.

Sunday night Pakistan’s largest Airport in Karachi was under attack by the heavy armed Militants. According to the media reports there were 10 armed militants wearing suicide vests managed to enter Jinnah international airport in Karachi.

They entered from the Fokker gate (Service gate) with ASF fake Id cards and opened fire on the runway, they were using automatic Machine guns and Grenades.

According to the information, 23 people were killed in this terror attack, including 10 terrorists.

The local media stated “A fire rose from the airport, enlightening the night sky in an orange blaze as the shape of jets could be seen”

This was not the first attack on high value target areas, in May, 2011, Militants also attacked Pakistani Naval base in Karachi in which 10 soldiers were killed and 15 were seriously wounded .

• In December, 2009 seven Gunmen entered into the Parade Line Mosque in Garrison city (Army Base in Rawalpindi) and kill 32 people and injured more than 65 people.

• On 4th June, 2014, Zahir Shah and Arshad, both Lieutenant-Colonels were killed by the suicide attack.

When Our Government is failed to protect the Army installation or Sensitive areas, then how come they protect the Venerable Minority community in Pakistan from these Taliban’s. Christians, Ahmadi’s Hindu and even moderate Muslims are in fear from them, everyone is looking for the possibilities to leave the country. In 2012 thousands of Hindus left Pakistan and took refuge in India, Thousands of Pakistani Christians, Ahmadi’s has taken refuge in South Asian countries.

. This all began with Muhammad Zia-ul-Haq’s controversial ISLAMIZATION policies of the 1980s, which put Pakistan into fire. He invited Mujahideen from the Islamic world to fight against Russia. This shorter term policy destroyed the peace in Pakistan. And wild wave of sectarianism, religious bigotry and on the spot “Mob Justice” killing on the spot, has overwhelmed our society. Religious extremism has grown beyond all proportions. Now there is No peace in Pakistan.

Even the Present government propaganda and agenda against the Armed forces are putting Pakistan into more terrifying situation. I strongly doubt that if Pakistan Armed forces were not allowed to hold operation against Taliban’s or Terrorists, then in coming days the situation will be even worse.