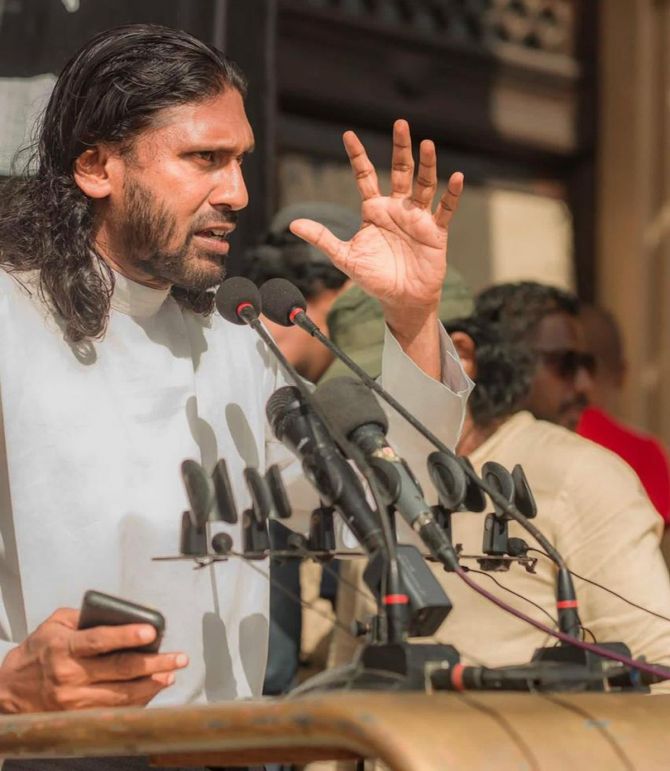 Sri Lankan Police hunt for a 45 year old local priest has generated a wave of anger among country’s Christians. On July 27, the police conducted a raid at Ratnapura in Sabaragamuwa Province of south-central Sri Lanka searching for Father Amila Jeewantha Peiris. The raid was strongly deplored by the rights defenders and church officials.

The priest has been a key figure in the anti-government protests. Two days prior to this raid, a Sri Lankan court had slapped travel ban on Father Peiris and five others for allegedly participating in “unlawful assembly and damage to public property” during a protest rally in June. Nonetheless, Father Peiris has been a key figure in the months-long anti-government drive at Galle Face Green in the capital Colombo. The protests were effective enough to expel the Rajapaksa family dynasty from the long reign. The Rajapaksa’s were blamed for the country’s worst economic crisis.

In the face of ongoing government crackdown against activists and journalists, it can be assumed that allegations of this kind are just likely excuses for the state to repress the clergyman. The Sri Lankan government currently, exercises the authority to detain anyone for up to 72 hours for any reason.

Father Hari Haran Rajapriyar from Ratnapura diocese expressed shock and grief at the raid conducted by the police. He said that Father Peiris “loved the non-violent movement of Mahatma Gandhi and the resistance of Nelson Mandela.” Further lamenting, he said that “The poor people protested asking for the right to live (food and fuel). The rulers have defrauded the country for the last 74 years, it’s not that they have to intimidate and arrest the innocent protesters but think and plan to provide the Sri Lankans with the basic needs.” He urged that the politicians should cease “using state-sponsored terrorism on innocent people.”