So what if she is 8-months old? She is Ahmadi, kill her! 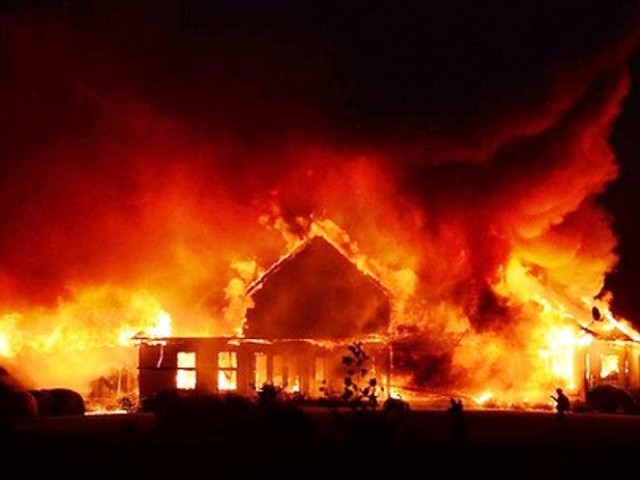 As Pakistanis prepare for the end of Ramazan and the arrival of Eid, we come across the news that an Ahmadi residence was set on fire by a mob, killing a mother and her two daughters, five-year-old Kainat and eight-month-old Hira. As are most religious crimes of vengeance, this incident also has roots in our archaic notion of blasphemy.

People are only too keen to take justice into their own hands when it comes to religious sentiments, as this incident shows. Minorities bear the brunt of such accusations, although blasphemy laws have been used against Sunni Muslims as well to settle land and financial disputes, Ahmadis are not the only ones being targeted – Shias and even Barelvis have been accused for not being “true” to Islam.

The blame for such hate rests not only with the extremist elements in our society who have hijacked religion for their degenerate purposes but also with the state. Zulfiqar Ali Bhutto’s government adopted a law in the early 1970s, which declared Ahmadis to be non-Muslims. What was politically expedient for Bhutto then, and Ziaul Haq later, is a crisis for Pakistan today.

Even as Pakistan has sought to secure its physical borders, it is losing the battle for its soul within its boundaries. The biggest threat to Pakistan’s existence comes from within. Our children are growing up with a hatred for their fellow Pakistanis. Newspapers regularly publish articles bashing the Ahmadis. The prejudice against them is deep seated and officially sanctioned.

Blasphemy laws are being abused and those accused can rest assured that their last rites have been read, regardless of their religious affiliation. The Hindu community is heading east across the border due to forced conversion of Hindu girls, the Sikh community has seen its religious sites disfigured by extremists, the Christian community fears that another set of “Gojra riots” are just around the corner and no amount of military hardware can resolve our predicament.

There is an urgent need for the federal and provincial governments to take stock of this crisis of identity facing Pakistan. It is a crisis that could well have been avoided if the words of Pakistan’s founding father had been heeded to. On August 11, 1947, three days before independence, Quaid-e-Azam Muhammad Ali Jinnah spoke to the Constituent Assembly of Pakistan. He was adamant when he said,

“You are free; you are free to go to your temples, you are free to go to your mosques or to any other place or worship in this State of Pakistan. You may belong to any religion or caste or creed – that has nothing to do with the business of the state. You will find that in course of time Hindus would cease to be Hindus, and Muslims would cease to be Muslims, not in the religious sense, because that is the personal faith of each individual, but in the political sense as citizens of the state.”

It is to these words that we should turn to for guidance and inspiration. We cannot just hedge our bets anymore and hope for the best. We cannot afford to lose another Kainat or Hira to such viciousness.