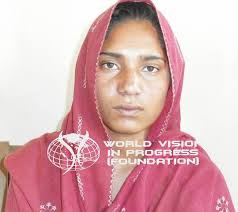 WVIP-News Christian Girls are Defenseless to Rape and Forcibly conversion:

Saima Masih  ,16 years old Christian girl, resident of Tehsil Yazman  mandi, Bahawalpur, was abducted ,raped and forcibly converted to Islam by one of the influential Muslim Landlord Muhammad Javed . Saima and her family were living in District Bahawalpur, her father Gulzar Masih was a poor cultivator.

Saima Masih was often harassed by Muhammad Javed, who is one of the wealthy Muslims of the Yazman Mandi . On  25th  January, 2012, when Saima went to the local Bazzar  along with her neighboring friend, she was publicly harassed and proposed by Muhammad Javed for marriage. She instantly refused and insulted him. After reaching home, she reported this incident to her mother and father. On the same evening, parents went to Muhammad Javed ‘s home and complaint to his father Muhammad Riaz. Instead  of warning his son, he threatened the poor Christian parents  for dare-consequences.

On 9th March, 2012, with the help of Zubaida Bibi (a neighboring lady who had strong relationship with Saima’s family), Muhammad Javed abducted Saima Masih while her parents were not at home .They took Saima to Gujrat where Muhammad Javed and Muhammad Sardar (Uncle of Muhammad Javed) raped her .

Gulzar filed an application against Javed and his family in the local police station, but police took no action against the culprits. After knowing the seriousness of the situation on 15st March, 2012, Muahmmad Javed Forcibly converted her to Islam, after taking her signature and thumb impression on different papers. And then on 21st March he again took the Signature’s of Saima Masih on the Islamic marriage certificate.

For six Months Saima Masih was repeatedly sexually tortured by Muhamamd Javed and his uncle Muhammad Sardar . On 12th September, 2012 Saima got a chance to escape from the place where they had kept her. She reached her home and inform her parents, all what happened to her.

Saima along with her parents went to police station but again No Action was taken against the culprits. As Muhammad Javed is wealthy and influential person.

When WVIP came to know about this incident immediately WVIP legal team reached the family and filed application for registering FIR against Muhammad Javed, However the application was turn down by the session court of Bahawalpur . Now WVIP has filed a petition is the High Court for registering an FIR against the Culprits. Saima and her family is receiving threats from Muhammad Javed and other influential political persons to withdrew her case otherwise they will make her life hell. Due to these threats Saima and her family is hiding in the safe-home of WVIP.

Mr. Saif avowed that “Many Christian’s girls are raped at the hands of the Muslim people in Pakistan. Rape and abduction has been used as a strong weapon against the Christian and other Religious oppressed community girls in Pakistan, a country where Christians and other Religious communities are treated as the most un-accepted elements of the society, targeting Christian and other girls and women become so pleasure full event for Fanatic Muslims. Christian girls are particularly vulnerable to these types of crimes.  Christian girls and women normally don’t file any police reports against such crimes; they usually kept silent because of the fear from the Islamizes as well Christians are also economically very poor and cannot hire any lawyer to defend them. That’s why only two percent rape cases were reported and majority cases were never came on media or press”