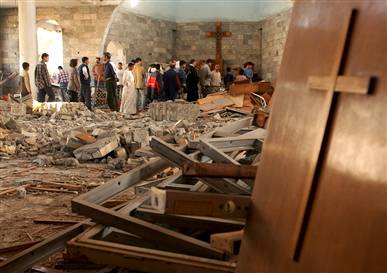 US and its western allies are making the lives of Christians in Islamic world more miserable, Starting from Pakistan in 80s they created Mujahideen and opened 100s of madras’s in Pakistan to fight against Russian invasion in Afghanistan. They supported the One of the deadly dangerous man Osama Bin Laden . Who later on turn against US and its allies and killed thousands of Innocents.

These madras’s and Mujahideen, changed the mindset of common people in Pakistan, this change of mindset led the religious communities’ persecution in Pakistan.

Similarly, US and Its allies are supporting rebels in Syria which are destroying the lives of Syria Christians , Thousands of Christians in Syria were Killed, Raped, burn by these Islamist rebels. Thousands of Syrian forced to leave the country for the safety of their lives.

On Tuesday, these International –Syrian terrorists has invaded the ancient city of Mosul , Mosul is the third largest city of Iraq. US and its Allies removed Moderate Saddam Hassan from the powers and it was just to please their Saudi friends Who desire to hold the entire region of Middle east.

According to the Assyrian International News Iraqi Archbishop and Priests. The Archbishop Amel Shamon Nona of Mosul described to Fides Agency

“The climate that now reigns in Iraq’s second largest city, which was captured two days ago by the rebels of the Islamic State of Iraq and the Levant (ISIL), the Jihadist faction also active in the Syrian conflict. The Chaldean Archbishop confirms that the vast majority of the 1,200 Christian families have left the city”

Jihadist bombed two Churches in Mosul The Church of Holy Spirit and Armenian Church, this was the clear message from Jihadists “leave Iraq or ready to Die” .

If US and its allies did not change the Polices , the day is not far when Christianity will be abolish from the origin of  its birth.