On defining a Muslim :By Tahir Kamran 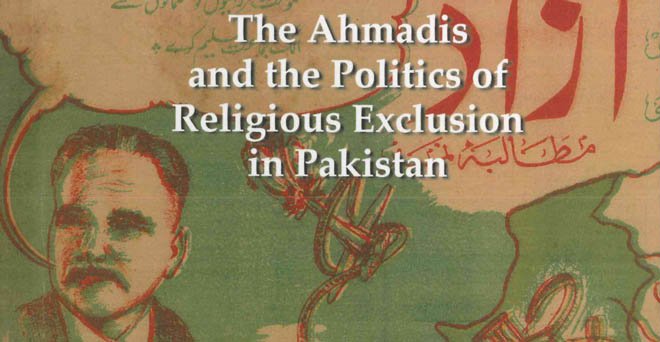 On Defining a Muslim By Tahir Kamran .

Ali Usman Qasmi’s prolificacy as a historian surprises me. His second book The Ahmadis and the Politics of Religious Exclusion in Pakistanhas been published just a few weeks ago. Prior to this, his contributions to the existing body of literature on religion and politics have been lauded in and out of Pakistan.

His previous book Questioning the Authority of the Past: The Ahl ul Quran Movement in the Punjab was a path breaking study. Similarly his recent book in which he interrogates the complex intertwining of religion, politics and the post-colonial state in a bid to determine the status of Ahmadis in Pakistan is indeed a brave effort on his part. The mere fact that he has engaged with such a sensitive theme in the given situation is highly commendable. Equally creditable is his line of argument, academically formulated and marked with analytical profundity.

The rich source material on the Punjab disturbances in 1953 which was rotting in the Punjab Secretariat library has been put to its optimum use. Of extreme import are the statements of various Ulema before “the court of Inquiry constituted under Punjab Act II of 1954 to enquire into the Punjab disturbances of 1953”. Thus Qasmi’s pioneering work relies not only on the Munir-Kiyani Report and its proceedings, but also on a very recently declassified (unofficial) record of the parliamentary session(s) in 1974, whereby Ahmadis were declared non-Muslims. This is an archive-intensive scholarly venture on a subject which has remained quite peripheral to the discourse of our national history.

Asad Ahmad’s brilliant PhD dissertation titled Adjudicating Muslims: Law, Religion and the State in India and Post-colonial Pakistan, which he wrote at the University of Chicago, seemed to have left very little to be added to the analysis. The only caveat is Asad Ahmad has prioritised the legal dimension of the Ahmadi exclusion rather than its socio-historical one. Qasmi’s work fills that gap in a meticulous manner. Apart from exploring new vistas with the help of untapped archival sources, he has also mapped the steady rise of the concept of Khatam-i-Nubuwat (Finality of the Prophet), which is a novel contribution from a young scholar.

Narrowing down his focus on the intellectual aspect of the anti-Ahmadi campaign, Qasmi has also cast his interrogative gaze on the issue of “the definition of the Muslim”, a question which proved to be agonisingly difficult for the Ulema in the court of inquiry in 1953.Ahmadis and the politics of religious exclusion in pakistan

I will limit my scope of analysis to this very question which, to my reckoning, is of vital importance and which has been given some space by the author of the book. While contextualising the inability of the Ulema to forge a consensus on defining the ‘Muslim’, Qasmi harks back to the colonial past and draws heavily on Asad Ahmed’s inferences. While doing so, he mentionsKalyma as an agreed instrument of ascertaining identity as a Muslim because ‘belief’ was privileged over the ‘ritual’ in order to ‘imagine and enforce the boundaries of a homogenous and identifiable social group (e.g. “Muslims” or “Hindus”) which were subject to a single system of personal law.’ Thus the importance of the differences based on the rituals among various Muslim sects was set aside by the colonial courts and the commonality of beliefs between different Muslim groups was underscored.

Obviously with the emergence of Ahmadiya faction, that marker of identity was felt inadequate for being a bit too inclusive. What is noteworthy here is the process of colonial modernity driving a classificatory wedge among the ‘colonised’. Census, ethnographical surveys and various ways of asserting community/factional identity were the standard methods of classification used by the British from 1870s onwards.

‘Defining’ the subject was the most crucial step for colonial modernists in order for them to make sense of it. Thus the process of modernity had come full circle when the confounding question of ‘who is a Muslim’ was posed to the Ulema. Probably the Ulema did not know that the definition of a Muslim had already been thrashed out by someone who was modernist to the core — none other than Allama Iqbal. Iqbal, in a rejoinder (Islam and Ahmadism) to Jawaharlal Nehru’s article, in which he asserted that the Ahmadis were Muslims, defined the ‘Muslim’ as someone having unequivocal faith in ‘the Unity of God, the divinity of the Quran and the finality of Muhammad’s prophethood’. (Page 40) In the light of Iqbal’s definition, Ahmadis certainly were excluded from the pale of Islam.

The question of whether any person can be defined through the faith that he holds is quite a daunting venture. No-one can ever be defined through something that is not quantifiable. Can the scale of how much faith anybody has ever been worked out?

Here the German philosopher Nietzsche’s invocation in his ‘Genealogy of Morals’ seems quite pertinent, according to which “only what has no history can be defined”. He thought that Socrates had put us on the wrong track by suggesting that it was important to try to get formal definitions of those human phenomena that were of the greatest concern to us. Nietzsche deemed it perfectly appropriate to seek definitions of abstract items or features of the natural world. Thus terms like ‘triangle’, ‘water’, ‘mass’ or ‘gene’ could be defined. These objects are not contingent on the mutability of history. A triangle was a triangle in the fifth-century Greece just as it was in nineteenth-century England, and the same holds for water. Human history, though, was concerned in the first instance not with entities such as these, but with concepts such as Islam, punishment, conscience and morality, which were “inherently as well as historically variable configurations of powers, functions, structures and beliefs”.

One may also draw from Ali Usman Qasmi’s study of the Ahmadi exclusion that through defining any entity, the process of exclusion is set in train which entails hatred and antipathy, both of which have come to haunt us ever since we started making sense of our faith through the prism of modernity.