Monday, 2nd November, Farrukh Saif Foundation, which is a registered and licensed organization in Spain, has submitted a petition in Ministry of foreign affairs, Ministry of Interior and the Parliament of Spain requesting for the resettlement of 50 Pakistani Christian families in Thailand to Spain.
To add more power to the petition and the case requested, Farrukh Saif Foundation has deposited 200,000 (Two hundred thousand) Euros into the official bank account of the Ministry of Interior of Spain as an assurance that these people will not become a burden on the Spanish government instead their living expenses in Spain for the initial 2 years will be borne by Farrukh Saif Foundation. This financial guarantee makes our petition much stronger. 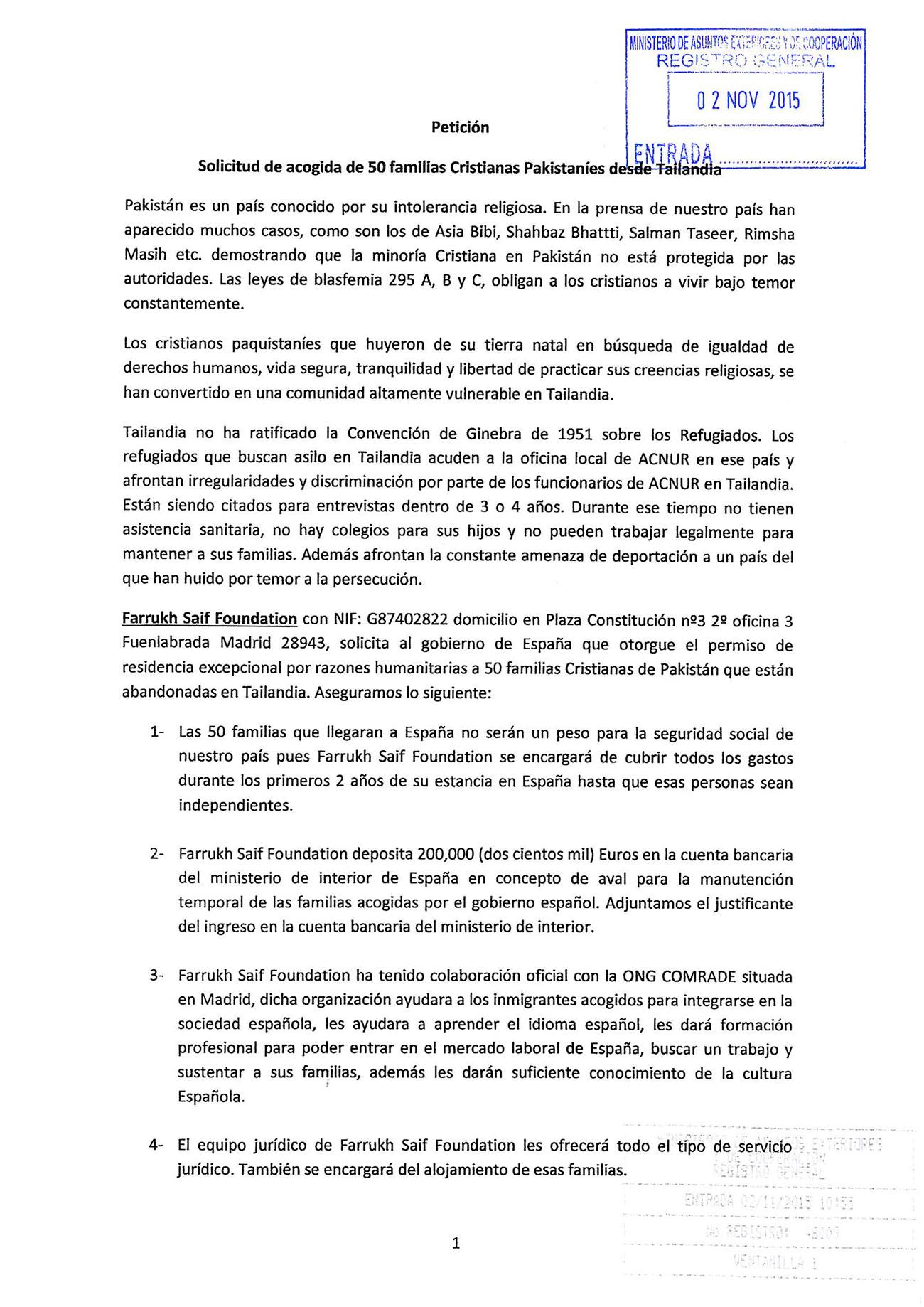 Many people in past have made similar actions which we highly appreciate, however, our case is different because we have deposited the guarantee money as well which makes the Spanish government believe that the Spanish social security system is not going to face a burden and these people will stand on their feet on their own. The first page of those petitions submitted is attached below containing the stamps of above mentioned government institutions and the registration number. 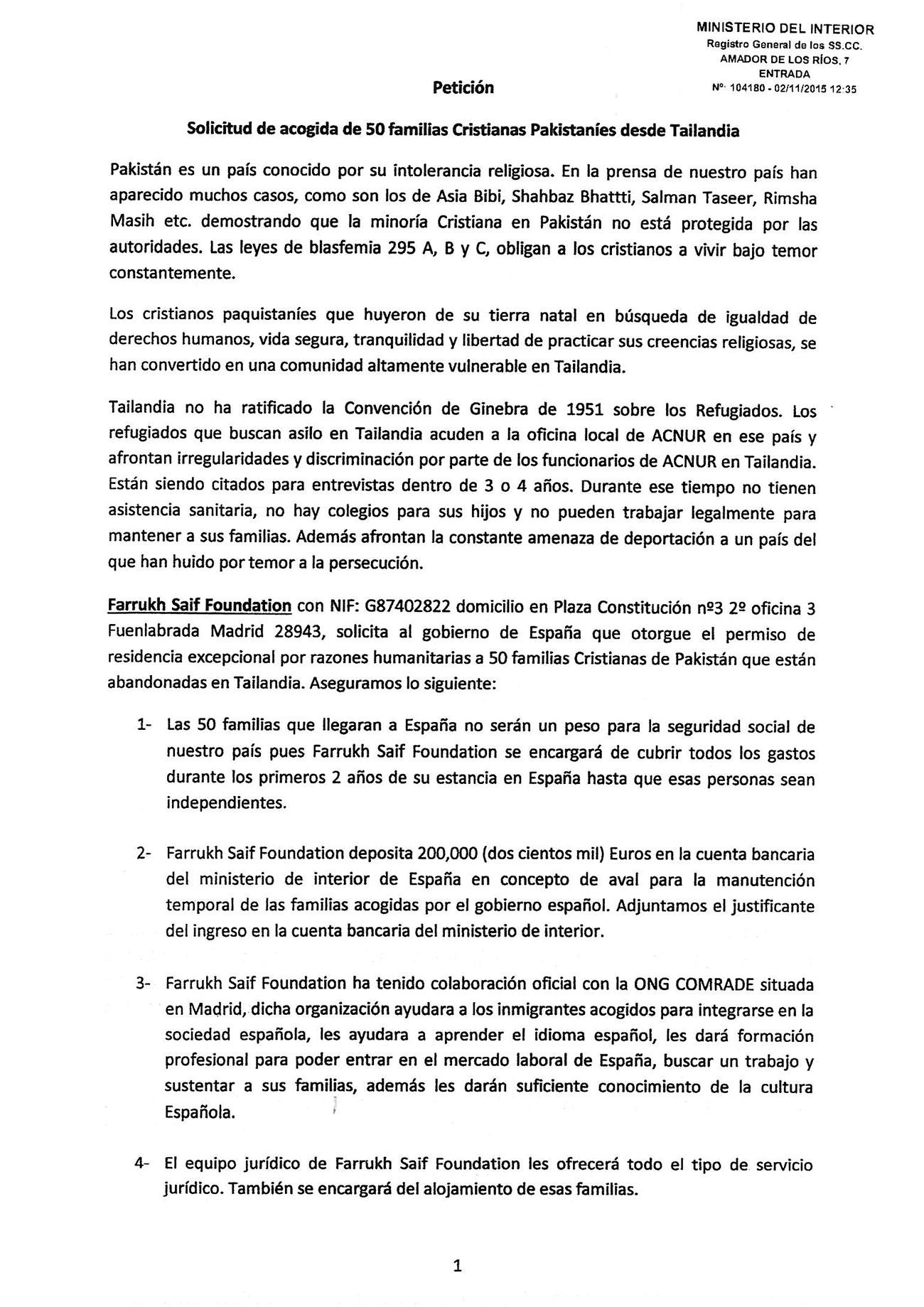 Also, Farrukh Saif Foundation has formed a collaboration with a Spanish organization by the name COMRADE, which will be responsible for helping the Pakistani Christians to integrate into the Spanish society. It will be responsible for providing Spanish language classes for the resettled Christians so that they could easily overcome the language barrier. Apart from that they will help them in receiving different type of courses for being enabled to become part of Spanish labor market. All the expenses for those trainings will be paid by Farrukh Saif Foundation.

Recently, I have heard from many different people that Farrukh Harrison Saif has disappeared and that the Pakistani Christians in Thailand are suffering gravely and that he has stopped helping these people who he claimed to be his brothers and sisters, who he promised to stand with till his last breath.
Is it so easy for them to forget that only 6 months ago, I paid the bails for 57 people in IDC which was about 2,850,000 Bahts which is equal to almost 80,000 USD? In March, Farrukh Saif Foundation paid for 40 Christians to be released from the police station, and then from July to October, we paid the fines for so many people, including 48 fines in October alone. Apart from that 30 to 40 families were regularly sent money to pay their rent and cover the expenses for some basic needs. 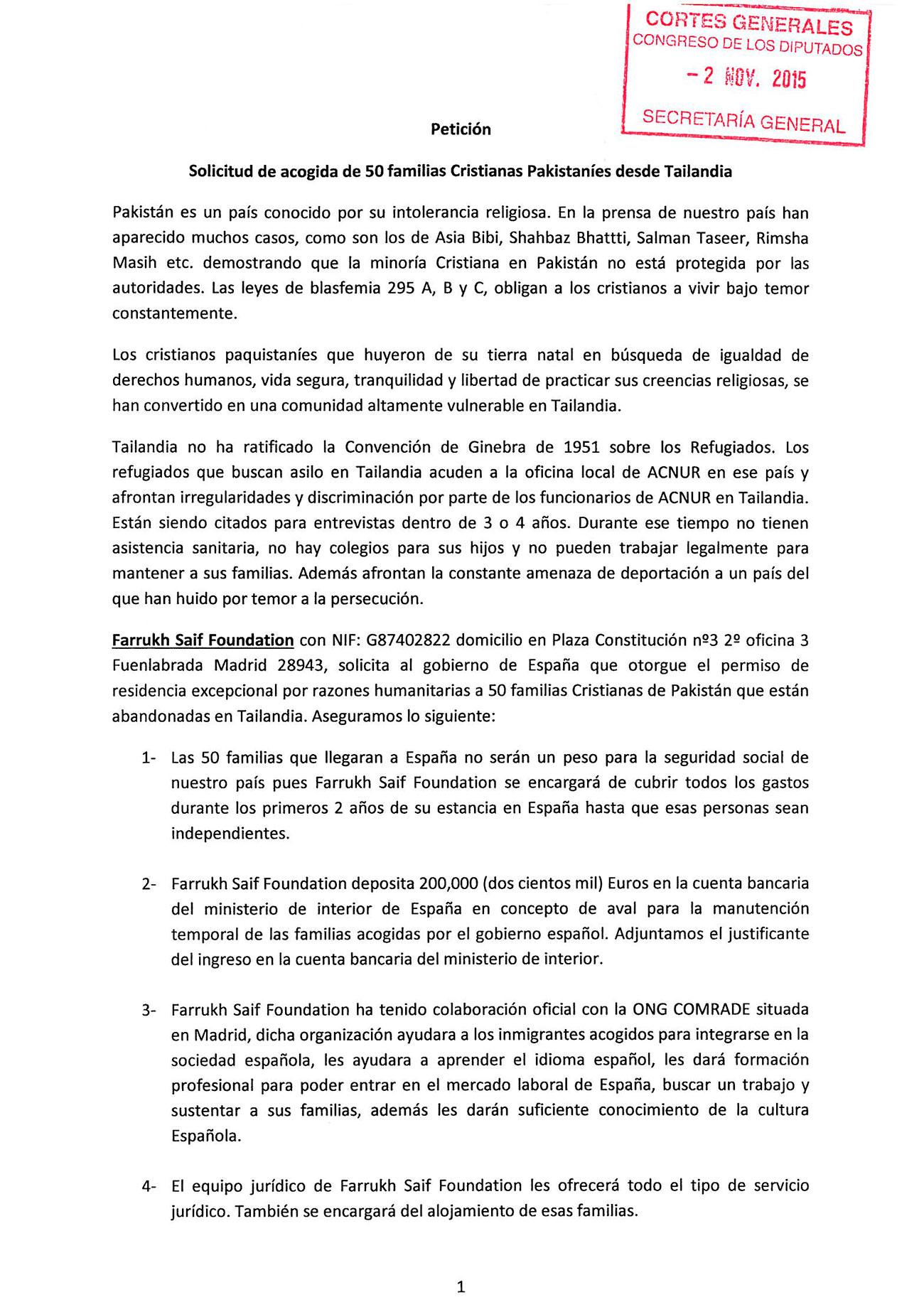 I am not a hypocrite and my heart bleeds while writing about all that I have previously done for my people. But the judgment being passed upon me by the same people who I helped has just broken my heart. I have been forced to pick up my pen and write about all this. I am not trying to boast, this is just a reminder of how quickly we sometimes judge people and make bold statements against them. My own people have hurt me with their words, but I have promised to stand with you and I always will. However, we need to change the way we think, this is not the true Christian spirit, and is perhaps the main reason why our Christian community is still unsuccessful.

If I only make bold public appearances, constantly remain in the limelight and keep giving you money, only then I am good? It’s true that recently, I have failed to make “public appearances” but does that mean that I have abandoned my people? No! Not at all. Farrukh Saif Foundation has been working on a wider scale for these Pakistani Christians. First we submitted an official complaint against UNHCR Bangkok at the headquarters of United Nations in Geneva and now the delegation of our lawyers is about to file a case against UNHCR Bangkok in the International Criminal court in France, and yet my people still believe that I have abandoned them?

I am also a normal human being, I too need my 8 hours of sleep, I am not a robot who could work 24 hours every day and be present everywhere. My people, the Pakistani Christians, are my priority but it hurts when they easily ignore that I was hospitalized because of my health, they easily ignore that I too could be facing some family issues, but they never fail to complain if I wasn’t able to be present at some occasion. Farrukh Saif Foundation has been working really hard to make possible the resettlement of Pakistani Christians to Spain. I am not making any promises as to when this will take place, but the below attached pictures are proof that it definitely will take place.

I have promised to stand with my people till my last breath, and I always keep my word. May God bless all the Pakistani Christians currently residing in Thailand and keep using me to help my people. Let´s pray together for this petition to be approved, Amen.