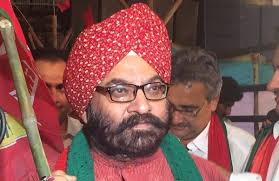 Dr.Sardar Soran Singh was a Patriotic Pakistani leading Sikh by profession Doctor ,Politician,Activists, Member of provincial Assembly and Special Assistant on Minority Affairs Department of Khyber Pakhtunkhwa on minority reserved seat. He was gunned down in Buner District  (KPK ) on friday 22 April 2016.

This brutal murder is another incident that minorities in Pakistan are not safe. Tehreek-e-Taliban Pakistan has claimed the responsibility of both Easter bombing and Dr Singh murder.

Dr Singh was legislature of currently ruling Government in khyber pakhtunkhwa. Dr Singh had served for Jamaat-e-Islami for many years and later in 2011 had joined Pakistan Tehreek-e-Insaf ,The political party led by Cricketer-turned politician Imran Khan.

In 2015, Dr Singh has reopened the Ancient Jugiwara Gurdwara in Hastnagri locality in Kpk which was closed since 1942 due to dispute of Muslims and Sikhs  “Privacy “. The Grand Jirga was held in the office of the Peshawar Deputy Commissioner to resolve the longstanding dispute of this Gurdwara. Sikhs make up less than one percent of Pakistan’s 190 million population.

This brutal murder is another incident that minorities in Pakistan are not safe. Tehreek-e-Taliban Pakistan has claimed the responsibility of both Easter bombing and Dr Sardar Soran Singh murder.

“Isn’t that makes surprise some unknown have murdered the Dr Singh in his native town where he have grown up?”

Thousands of Hindus and Sikhs have migrated, or forced to leave Pakistan to grab their properties, to India at time of Indo-Pak partition and But Dr Singh family had decided to live in Pakistan.

Target killing, kidnapping, Ransom forced conversion to Islam are common in Pakistan with minorities but it’s alarming situation for Pakistan or any state when minorities are murdered due to their religious faith.conditions is getting worse nobody knows what will happen. Minorities are constantly at risk of threat . Sikhs are under attack because they can be distinguished from other people because of their turban.They are in no position to name the culprits but we know these are attempts to further destabilize Pakistan and frighten the Sikh community.

Pakistan does not have a good track record of protecting minorities. Federal minorities minister, Shahbaz Bhatti, a Christian, being shot down in capital city Islamabad in March 2011 over blasphemy allegations.

Pakistan is a worst country where religious intolerance is on Peek. In past recent years we have witness this.There is no proper education in Puplic school and Madrasas.Pakistani Government text books are against of Christians and other minorities.

In a report issued by Minority Rights Group International (MRG) in 2014, Pakistan was declared one of the most dangerous countries in the world for religious minorities. The report mentioned militant groups like Sipah-e-Sahaba Pakistan (SPP), Lashkar-e-Jhangvi (LeJ), Tehreek-e-Taliban Pakistan (TPP) and which attack,  threaten and abduct minorities.

We ask Pakistani Government how long minorities would have to sacrifice? How long Christians have to suffer in Pakistan ?

“Pakistani government should take this serious and increase protections for all citizens, regardless of their religious.“