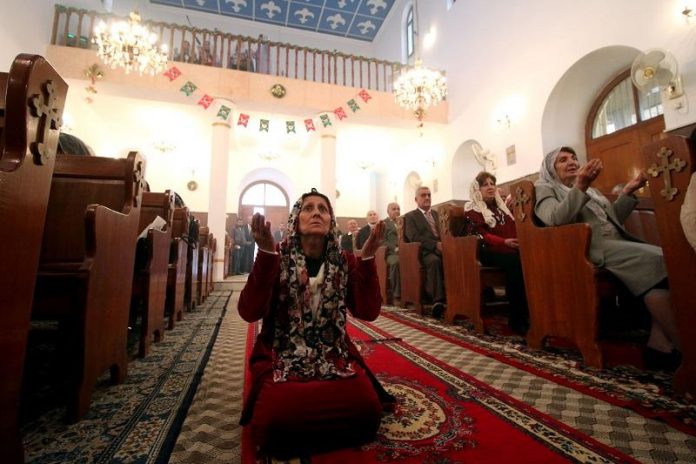 A new report portrays a gloomy situation for Christians nestled in Middle East. The report claims that Iran’s proxy militias are going all out for an “invisible jihad” against Christians in the Middle East.

The report by the Philos Project, has prepared this report, which says that the militias, are even successful in their efforts to push out Christians and reduce population. It was further stated that the Iranian regime has a vision of purging the region from non-Muslims, and that its militias have “labored to create conditions that forced Christians out.” The report further outlines that, “Iran’s proxy militias in Lebanon, Iraq, Syria and Yemen have played a significant, though largely unrecognized, role in the dramatic decline of Christians in the region.”

“Iran’s proxy militias in Lebanon, Iraq, Syria, and Yemen have played a significant, though largely unrecognized, role in the dramatic decline of Christians in the region. Guided by the theocratic regime’s vision of Muslim demographic purity, they labored to create conditions that forced the Christians out. Invisible Jihad— demographic reduction through coerced emigration—these militias use extant conflicts to manufacture conditions behind the massive exodus.”

The report recommends that “Driven by the neo-Shia quiet Jihad vision, Iran’s proxy militias have diminished much of the Christian population from the territories under their control without most of the world noticing. The exodus that started under ISIS was bolstered by demographic engineering that prioritized Shiafication.”

“The results have been dramatic: in Yemen, Christians were all but wiped out; in Iraq and Syria, the home of ancient Christian denominations, the numbers reached an inflection point on the path of virtual elimination. Once a majority Christian country, Lebanon has lost many Christians because of Hezbollah’s dual sovereignty system that diverts resources toward Shias. Despite the virtual collapse of the Lebanese state, Hezbollah is not expected to relinquish power, putting the future of Christian populations at risk.”