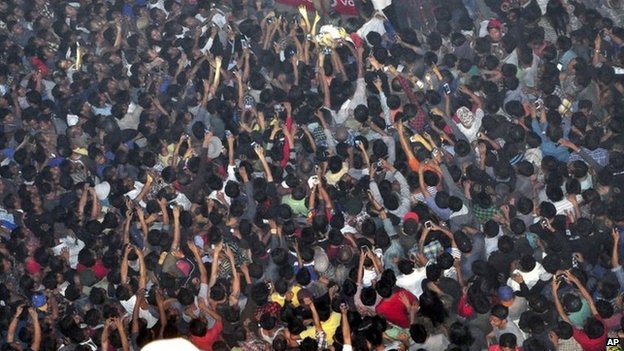 Another man falsely accused of blasphemy escapes mob-violence in Pakistan’s Hyderabad city. The incident unfolded on Sunday, August 21, when a Hindu man identified as Ashok Kumar landed in hot waters after a brawl with Bilal Abbasi. Bilal, a local shopkeeper later accused Ashok of desecrating the Quran.

Ashok Kumar worked as a sweeper, and lodged at the Rabia Centre in the Saddar Area of Hyderabad. After the news of the accusation spread, a charged mob gathered at the lodging place of Ashok and demanded him to be handed over to them. The police however, managed to disperse the incensed mob and took Ashok in custody.

“Hyderabad police dispersed a violent mob which was demanding handing over a Hindu sanitary worker accusing him of blasphemy Police claims the sanitary worker was targeted because of a personal clash with a local resident,” a Pakistani Journalist Mubashar Zaidi said in a tweet.

As soon, as the police arrived on the scene, they dispersed the charged mob thus saved Ashok from imminent lynching. Hyderabad police, later confirmed that Ashok was booked in a false blasphemy case, which was based on mere personal grudge as Ashok had a brawl with Bilal.

Another journalist Naila Innayat tweeted that, “Hindu sanitary worker Ashok Kumar booked under 295B of blasphemy over alleged desecration of the Quran in Hyderabad. The allegation came after a brawl with shopkeeper Bilal Abbasi who then lodged the complaint against Kumar.”

Misusing the blasphemy law to settle personal scores has now become a norm. Moreover, extra judicial killings and lynchings by enraged mob follow the blasphemy accusations. However, in this case, police managed to rescue the accused from the fierce rage of the mob. In this regard, Pakistan’s Human Rights Commission had previously highlighted the fact that incidents involving the mob-violence have increased alarmingly.