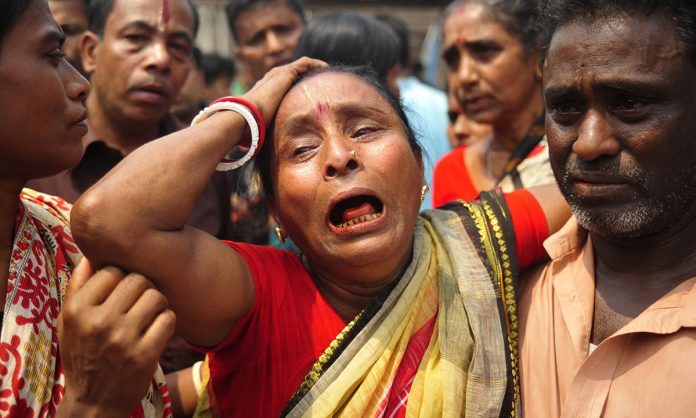 The Hindu community in Balochistan has been angered by the by the desecration of remains of a Hindu woman’s dead body. The agitated community staged a protest and marched on the roads of Kalat town of Balochistan protesting against the alleged incident of desecration of the remains of the dead body of the Hindu woman while in the crematorium.  The protestors chanted slogans against the local administration.

A representative of the local Hindu community clarified the incident saying that a Hindu died recently. Her dead body was cremated in a local crematorium (Shamshan Ghaat) by her family. While her remains were still on the crematorium ground unidentified persons burnt them. He alleged that after the miscreants entered in the crematorium, they throw her remains out thus, desecrated her remains, he alleged.

After the news of the incident spread, local Hindu community was angered. Local shops remained closed in protest of the incident. The march staged by the agitated Hindu community was headed by Mahraj Ghansham, Dewan Hari Chaand and Dr Nanad Lal. Moreover, local Hindu traders also shut down their their shops and gathered in the Shahi Bazaar area, before joining the march. In show of solidarity with the Hindu community, local religious and political parties also joined the march.

On behalf of local Muslim community, Hafiz Qasim Lehri, Maulana Atiqur Rehman, Haji Aziz also spoke on the occasion and expressed support for the Hindu community and upheld their demands. The angered Hindu leaders demanded that the miscreants should be arrested immediately. The protesters later called off their sit-in after the local administration held negotiations with them. The protestors warned that if their demands were not taken seriously, and the culprits were not arrested immediately, they will stage another protest for the time being and said that they would again stage another sit-in.