Blasphemy has become a License to kill innocents : By Farrukh Harrison Saif 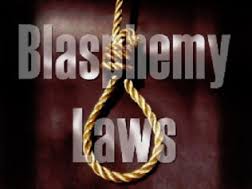 Lahore -Pakistan : Day after the brunt of Christian couple alive for committing Blasphemy against Islam in Kasur, a Pakistani policeman used an axe to kill a man arrested for allegedly committing blasphemy, today on 6th of Nov,2014 .

A 50 years old Tufail Haider, a member of minority Shia sect of Islam,  was arrested for allegedly making derogatory remarks toward the companions of the Prophet of Islam. He was arrested and taken to the e Civil Lines police station in Gujrat in the evening of 5th Nov.

According to the duty officer Ali Raza “ he was mentally upset and was looking like a Malang (who does not know of his surroundings).”

Whereas the Assistant Sub-Inspector of the Civil line police station Faraz Naveed got angry, and  he picked up the axe and entered into the lock up where he killed Haider on the spot.

This has been observed that Pakistan is now become the most hostile country in the world where anyone can kill any innocent by accusing him or her for committing Blasphemy.

Farrukh Saif Foundation requests the international community to lift the voice for the persecuted Minorities in Pakistan.