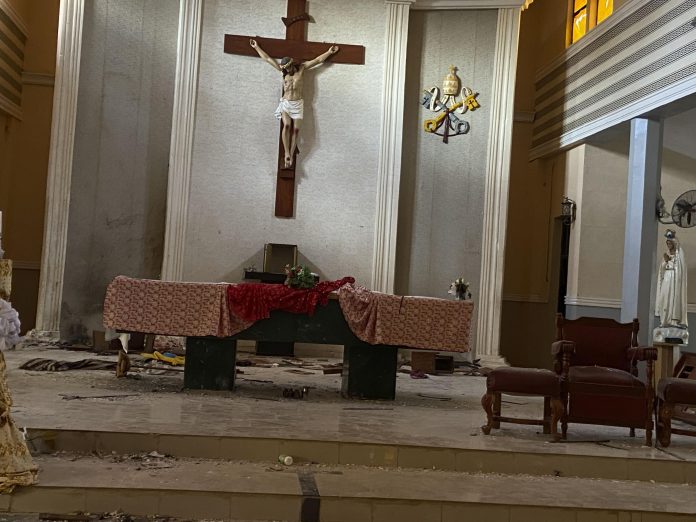 In a recent episode of cold-blooded attack on Christians in Nigeria, at least 70 Christians are killed. The attack unfolded in Nigeria’s Ondo state. Around 9, in the morning when the congregants had gathered at the St. Francis Xavier Catholic Church for Sunday service, the terrorists launched a gun and bomb assault.

The carnage claimed at least 70 lives while dozens were injured. Andrew Abayomi, an eye- witness, a priest who was present at the church when the attack perpetrated, told Morning Star News that when the service was coming towards the end, the terrorists threw explosives and opened fired at the worshippers. “We were in worship Mass when the terrorists attacked us. They shot at the congregation while breaking into the church by throwing improvised explosive devices at the church building,” he detailed.

The priest portrayed the horrific scenes of the carnage, saying that “Some of us hid inside the church as they shot randomly at us. This lasted for about 20 minutes before they retreated.” Moreover, there are reports that the terrorists had abducted some of the worshippers also. There are reports that the assailants abducted one of the priests along with some of the congregants.

This was a “black Sunday” in the history of Owo, Arakunrin Oluwarotimi Akeredolu, the Ondo governor said in a press statement. “Our hearts are heavy. Our peace and tranquility have been attacked by the enemies of the people.” He added, “This is a personal loss, an attack on our dear state. I am shocked to say the least.”

While reiterating his commitment not to bow down to terrorism he said, “Nevertheless, we shall commit every available resource to hunt down these assailants and make them pay. We shall never bow to the machinations of heartless elements in our resolves to rid our state of criminals.”

“I urge our people to remain calm and vigilant. Do not take laws into your hands. I have spoken to the heads of the security agencies. I have equally been assured that security operatives would be deployed to monitor and restore normalcy to Owo kingdom,” Akeredolu tweeted.

The identities of the assailants, who fled the scene soon after the attack, are still unknown as none of the terrorist outfits active in Nigeria have claimed responsibility for the attack. Condemning the attack the Nigerian President Muhammadu Buhari said that the attack was “heinous.”